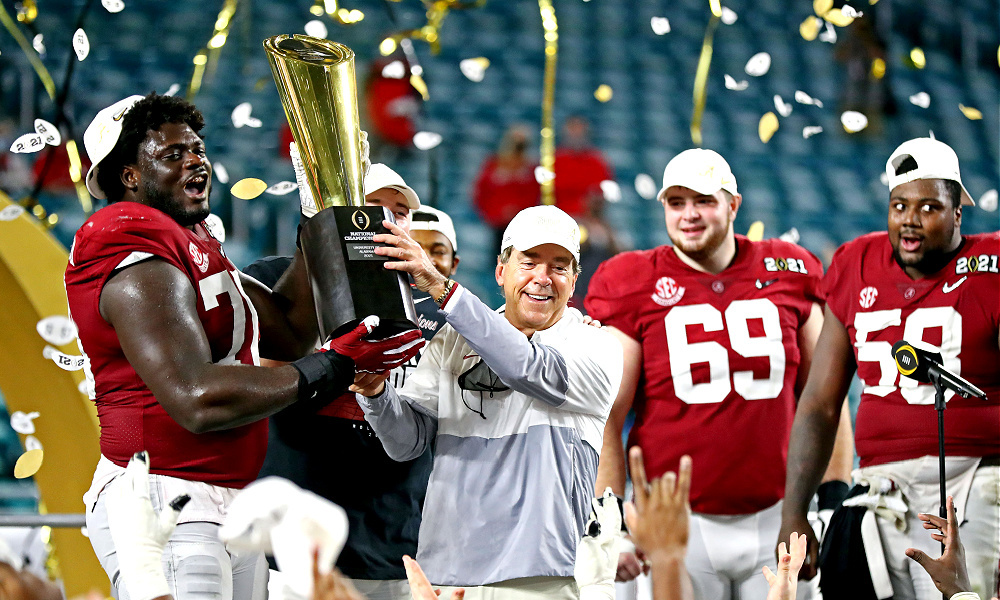 After months of deliberation, discussions between conference officials, and player-led movements, College Football has successfully played on throughout the COVID-19 pandemic, despite a few hiccups in scheduling and cancellations.

Some of the biggest surprises of the season came from underdog teams such as the 11-1 Sun Belt champions, the Coastal Carolina Chanticleers. Their most notable moment of the season was beating a stout #16 BYU team in a 22-17 showdown last month. Head coach Jamey Chadwell took home the Coach of the Year award for their unprecedented run.

Many experts in the preseason forecasted that a quarterback, for example Ohio State’s Justin Fields, would win the Heisman, an award given at the end of the season to college football’s best player. However, this year’s Heisman winner was Alabama WR Devonta Smith, who became the first wide receiver to win the Heisman since Michigan’s Desmond Howard in 1991.

For the Power 5 Conferences, (ACC, Big Ten, Big 12, Pac-12, SEC) games and championship seedings took unexpected turns with COVID cancellations and controversy abound. However, despite the chaos, traditional powerhouse names still managed to come through with a win in this year’s conference championships.

In the SEC, it was no surprise that the #1 Alabama Crimson Tide won, who beat the Florida Gators in a shootout, 52-46.

For the Big 12, the #6 Oklahoma Sooners won the title against #8 Iowa State, making it to the Cotton Bowl against the SEC’s #7 Florida Gators. The Sooners would go on to win in a 55-20 beatdown, their first bowl win since 2017.

Despite losing 2 games in their division, the Oregon Ducks were still able to make the Pac-12 championship as the Washington Huskies had cancelled due to COVID concerns.

They would go on to win the Pac-12 conference title, beating an unbeaten #13 USC team 31-24. After winning the conference title they received a bid to face Big 12 runner-up Iowa State in the Alamo Bowl. They were defeated 34-17.

In the ACC, the Clemson Tigers sought revenge after suffering their only loss against Notre Dame earlier in the season. The two teams squared off once again for the conference title with #3 Clemson soundly beating the #2 Fighting Irish 34-10. Both teams would end up making the 4-team College Football Playoff.

One notable controversy that was prominent this season was 2020’s Big Ten Conference title.

The Ohio State Buckeyes were originally disqualified from playing in the conference title game because they only played 5 games due to COVID cancellations, below the required amount to be eligible for the conference championship. However, the Big Ten Conference’s Council voted last minute to eliminate the rule a week before the game started. With the elimination of this rule, the Buckeyes were now eligible after head-to-head technicality. Many sports fans, especially those of the Indiana Hoosiers, (who were in line to play before being replaced by Ohio State) felt that the process was rigged for Ohio State. It is noted that many Indiana football players felt robbed and angered at the conference from their inability to participate.

This controversy went on further as the College Football Selection Committee went on to select Ohio State as it’s #3 team, despite playing less games compared to teams such as #5 Texas A&M (8-1).

After the conference championships occurred, the playoff semifinals were set:

#1 Alabama squared off with #4 Notre Dame in the Rose Bowl while the #2 Clemson Tigers took on the #3 Ohio State Buckeyes for the Sugar Bowl.

Alabama went on to soundly beat Notre Dame in a 31-14 rout, while Ohio State went on to silence the controversy and their critics by upsetting the Clemson Tigers 49-28. This marked Trevor Lawrence’s 2nd ever career loss during his time in Clemson.

Alabama would go on to face Ohio State in the National Championship which took place at Miami’s Hard Rock Stadium.

With their success also came losses for the future 2021-2022 season. Offensive coordinator Steve Sarkisian was hired by the Texas Longhorns as head coach, and key players such as Christian Barmore and Mac Jones would later declare for the draft on January 14th.

Despite the cancellations and uncertainties that occurred throughout the year, this 2020-2021 College Football season will forever go down in the history books as an accomplishment. To have all Power 5 conferences play their seasons before January is a feat that should be recognized as a success to the administrations and health supervisors involved.

Finally, and most importantly, this season saw a tremendous power shift back to the players. As thousands rallied together to have a season, during a time when cancellations seemed imminent, this movement has revealed how College Football is not just a game; it’s a passion and lifestyle for many. Let’s recognize all the hard work that was put into running this season, and as we enter the 2021-2022 preseason, let’s look forward to a time where everyone can be back in the stands again, cheering for their teams with pride.